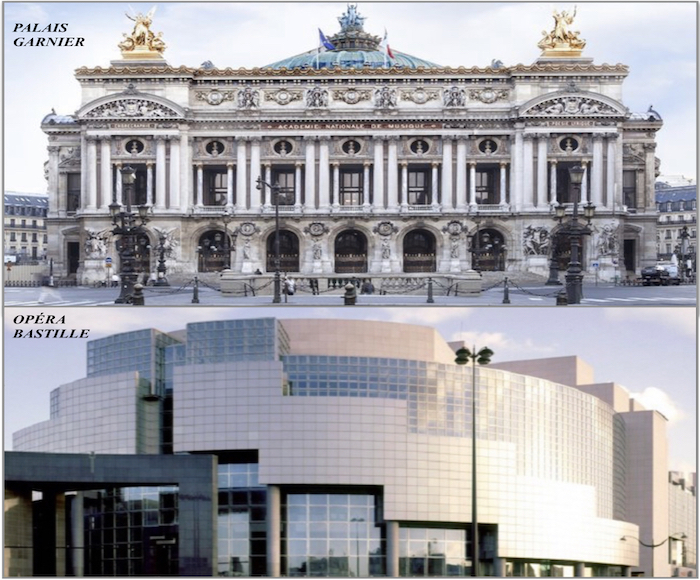 OPÉRA NATIONAL DE PARIS: PALAIS GARNIER: Built of marble of various colours, it is home to the double staircase leading to the foyers and the various floors of the theatre. In the tradition of Italian theatre, the horseshoe-shaped "French" auditorium, was designed for the audience to see and to be seen. The house curtain was created by theatrical painters Auguste Rube and Philippe Chaperon, following Charles Garnier's instructions. The ceiling painted by Marc Chagall was inaugurated on September 23, 1964. The OPÉRA BASTILLE is the work of the Canadian-Uruguayan architect Carlos Ott, who was chosen in November 1983 after an international competition that attracted entries from some 1,700 architects. The theatre was inaugurated on July 13th 1989. Its architecture is marked by transparent façades and by the use of identical materials for both the interiors and the exteriors. With its 2,745 acoustically consistent seats, its unique stage facilities, its integrated scenery, costume and accessory workshops, as well as its numerous work areas and rehearsal rooms, the Opera Bastille is a great modern theatre.
Reviews of: Opéra National de Paris

Purchase with complete security. Choose between PAYPAL or CREDIT CARD