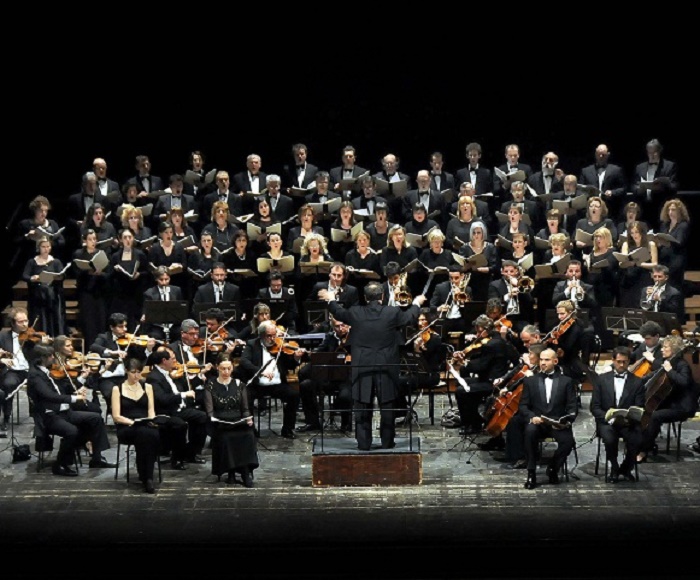 "L’ORCHESTRA DA CAMERA FIORENTINA" was established in 1981 by Maestro Giuseppe Lanzetta, its current permanent director, with the aim of spreading knowledge of the symphonic and chamber repertoire. Within a few years the Orchestra has come to the attention of national and international critics thanks to numerous concerts held both in Italy, for the most important Musical Institutions, and abroad in the various tours: United States, Mexico (III Gran Mexico City Festival 1991, VI International Music Festival of Morelia 1994), Europe (42nd Santander International Festival, IV International Festival of Gandia Spain, T ournée 1993 - Grand Theater M. De Falla of Cadiz, Auditorium M. De Falla of Granada, Grand Theater of Huelva, Sala Argenta of Santander, Salón de Actos of Avilés, Sala de Concertos Caixavigo of Vigo, Teatro Principal of Orense - Spain, Tour 1994), (Malaga - T erragona - Zaragoza - Santander - Spain, Tour 1997), Malta 1996 - Brazil 1997 - Portugal 1998 - Brazil 1998 - Slovenia 1999 and 2004 - Poland 2002 - Germany 2003 - Croatia 2006 - Spain 2011 (Tarragona, Reus, Murcia, Valencia - Palau by music). It consists of about 40 elements that can be structured even in agile chamber music formations: it organizes national and international competitions. Since 1985 the concert activity in Italy and abroad is partly financed by the Ministry of Cultural Heritage and Activities. He has over 1850 concerts to his credit, many of them for RAI and for the most important international networks, always obtaining unanimous approval from the public and critics who called it "one of the best orchestras from Camer to European". He has recorded various compact discs of rare music and baroque music under the direction of Maestro G. Lanzetta, also recording for Amiata Records. It has hosted internationally renowned ensembles and soloists such as: Mario Brunello, Augusto Vismara and Christiane Edinger, Jorge Demus, Eduard Brunner, David Garrett, Aldo Ciccolini, Alessandro Carbonare, Alessio Allegrini, Francesco Bossone, Rolando Panerai, Andreas Blau, Bruno Canino, Daniele Damiano, Cristiano Rossi, Vincenzo Mariozzi, Domenico Pierini, Piero Bellugi, Alessandro Specchi, Umberto Clerici, Gary Karr, Andrea Nannoni, Filippo Maria Bressan, Ilya Grubert, The Athestis Chorus, The Choir of the Maggio Musicale Fiorentino, The Choir Harmonia Cantata, the Chamber Orchestra of the Berliner Philarmoniker, Chamber Musicians of the Maggio Musicale Fiorentino, Ensemble of the Orchestra of the Accademia di Santa Cecilia, and the soloists of the Scala of Milan. He has also invited orchestra conductors from all over the world, chamber ensembles and chamber orchestras. He received the Beato Angelico Award in 2005 and the Florence Award in 2006 for his activity in Florence and in the World in his 30 years of activity. It is also funded by the Department of Culture of the Municipality of Florence, the Region of Tuscany, the Ministry of Cultural Heritage and Activities and other public and private bodies. Thanks to its activity it has made livable also to the music prestigious Churches and Museum Places such as the Church of Orsammichele and the Museum of the upper floors, the National Museum of Bargello, the Courtyard of Palazzo Strozzi, the Badia Fiorentina, S. Felice in Piazza, S .Jacopo Soprarno, S. Michele and Gaetano, and the Auditorium of Santo Stefano al Ponte Vecchio. Present in major city and regional events, he curates a series of top-level concerts for the Ente Cassa di Risparmio di Firenze, (Musical Wednesday of the Ente Cassa)
Reviews of: Orchestra da camera Fiorentina

Purchase with complete security. Choose between PAYPAL or CREDIT CARD