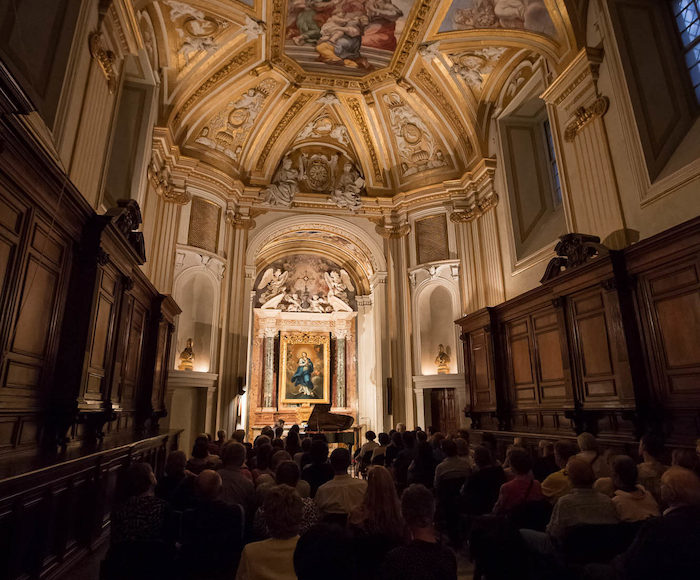 Sant'Agnese in Agone (also called Sant'Agnese in Piazza Navona) is a 17th-century Baroque church in Rome, Italy. It faces onto the Piazza Navona, one of the main urban spaces in the historic centre of the city and the site where the Early Christian Saint Agnes was martyred in the ancient Stadium of Domitian. Construction began in 1652 under the architects Girolamo Rainaldi and his son Carlo Rainaldi. After numerous quarrels, the other main architect involved was Francesco Borromini.
Harsh criticism was made of the design, including the steps down to the piazza which were thought to project excessively, so Carlo Rainaldi eliminated the narthex idea and substituted a concave facade so that the steps would not be so intrusive. The idea of the twin towers framing a central dome may be indebted to Bernini's bell towers on the facade of Saint Peter's basilica. Nonetheless, Rainaldi's design of a concave facade and a central dome framed by twin towers was influential on subsequent church design in Northern Europe. In 1653, the Rainaldis were replaced by Borromini. Borromini had to work with the Rainaldi ground plan but made adjustments; on the interior for instance, he positioned columns towards the edges of the dome piers which had the effect of creating a broad base to the dome pendentives instead of the pointed base which was the usual Roman solution. His drawings show that on the façade to Piazza Navona, he designed curved steps descending to the piazza, the convex curvature of which play against the concave curvature of the façade to form an oval landing in front of the main entrance. His façade was to have eight columns and a broken pediment over the entrance. He designed the flanking towers as single storey above which there was to be a complex arrangement of columns and convex bays with balustrades.